How to Build and Maintain a Simple Fire 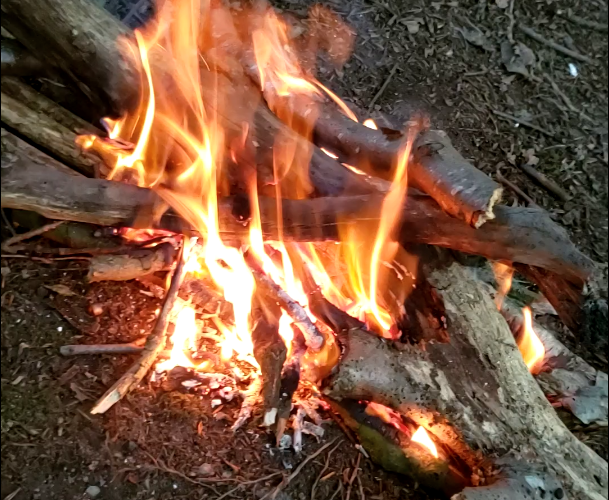 Building and maintaining a fire can be an incredibly difficult and tedious task when you’re just getting started.

So many aspects can go wrong and result in an hour (or more) of work being wasted.

Once you get one or two fires going though, it becomes remarkably easy.

Seriously, you’ll be able to get a fire going in about 15 minutes tops!

In the meantime, there’s a few things you need to learn.

Try not to get overwhelmed, it’s one of those things you only need to do once to get the hang of it! 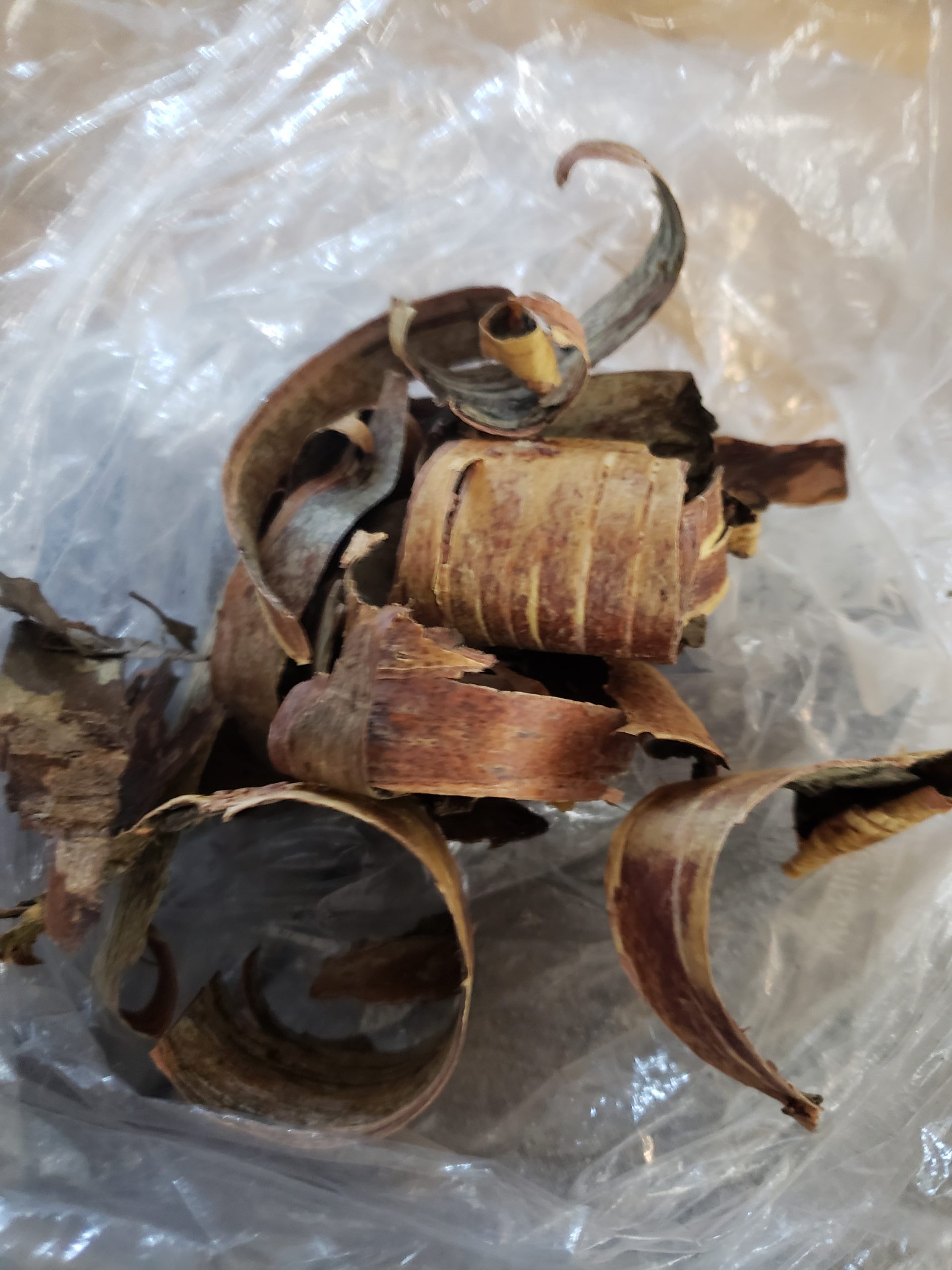 Tinder is what you’ll ignite with a lighter. It’ll burn by itself and allow the kindling to catch the flame.

You’ll want tinder that can catch a flame quickly and burn for a while.

Birch bark (pictured) is incredible for this. Just a few seconds of lighter exposure can set it aflame for a minute or two, more than enough time for the kindling to catch!

See these two articles for other tinders you can either find or buy:

Natural Tinders/Kindling You Can Easily Find in the UK

Tinders/Kindling You Can Easily Buy in the UK 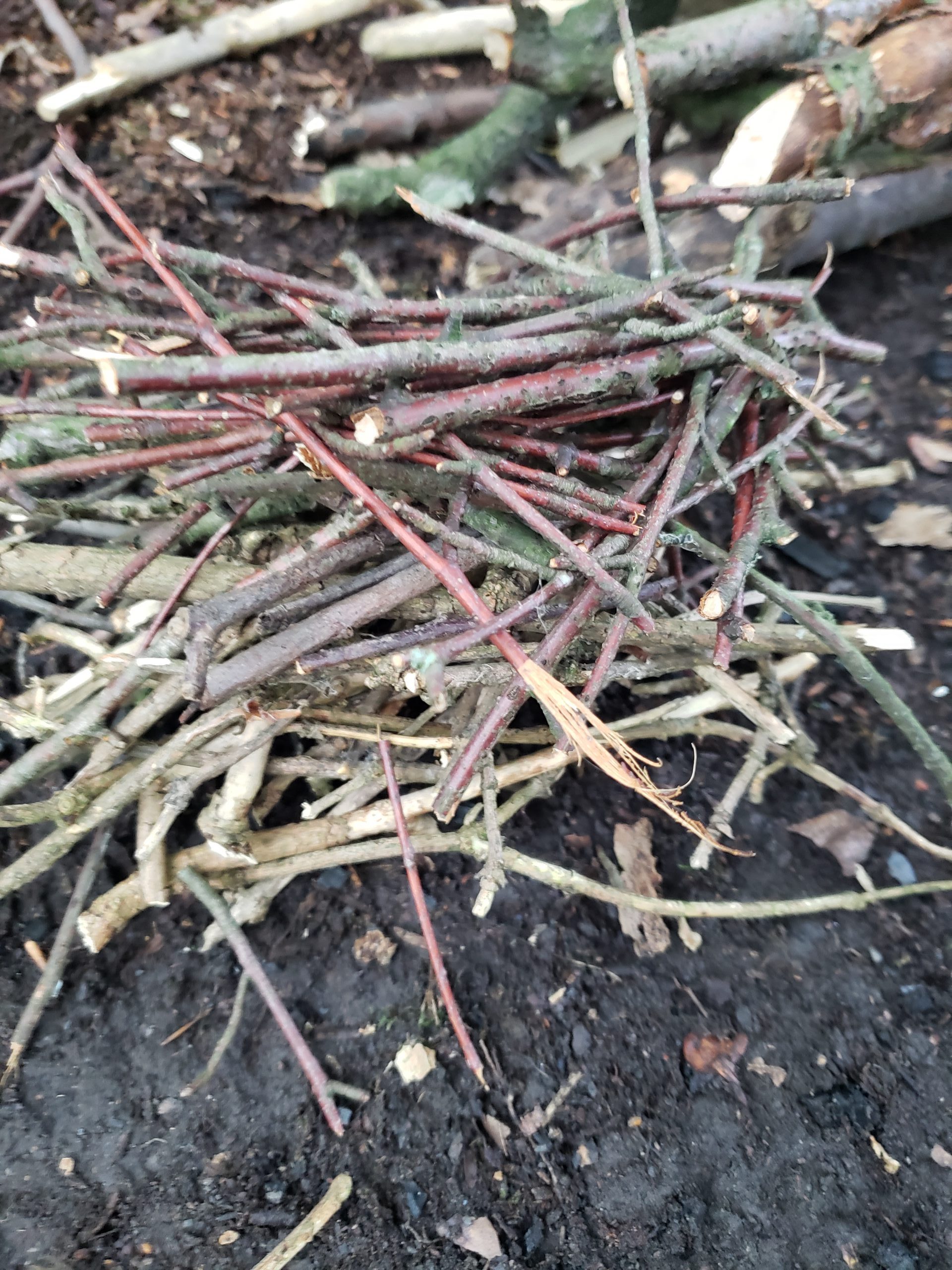 Kindling is intended to catch easily and burn hard for a short period of time.

Things like dry grass is a bit too much, it burns way too quickly.

Instead, you’ll need incredible thin sticks, a big bunch of them.

The more the better but a bundle sized above will be perfect for a simple fire of this size.

If conditions are damp or wet, find sticks that are hanging off dead branches or trees. These sticks are most likely to contain no moisture.

Dead sticks are an absolute must. Otherwise, the moisture will take too long to release and your fire will struggle to get going. The dryer the sticks, the better.

A solid way of checking is to bend the stick. If it breaks instantly, it’s good. If it bends, no good!

Also, look out for sticks that have leaves. Ones like the image below are absolutely perfect. 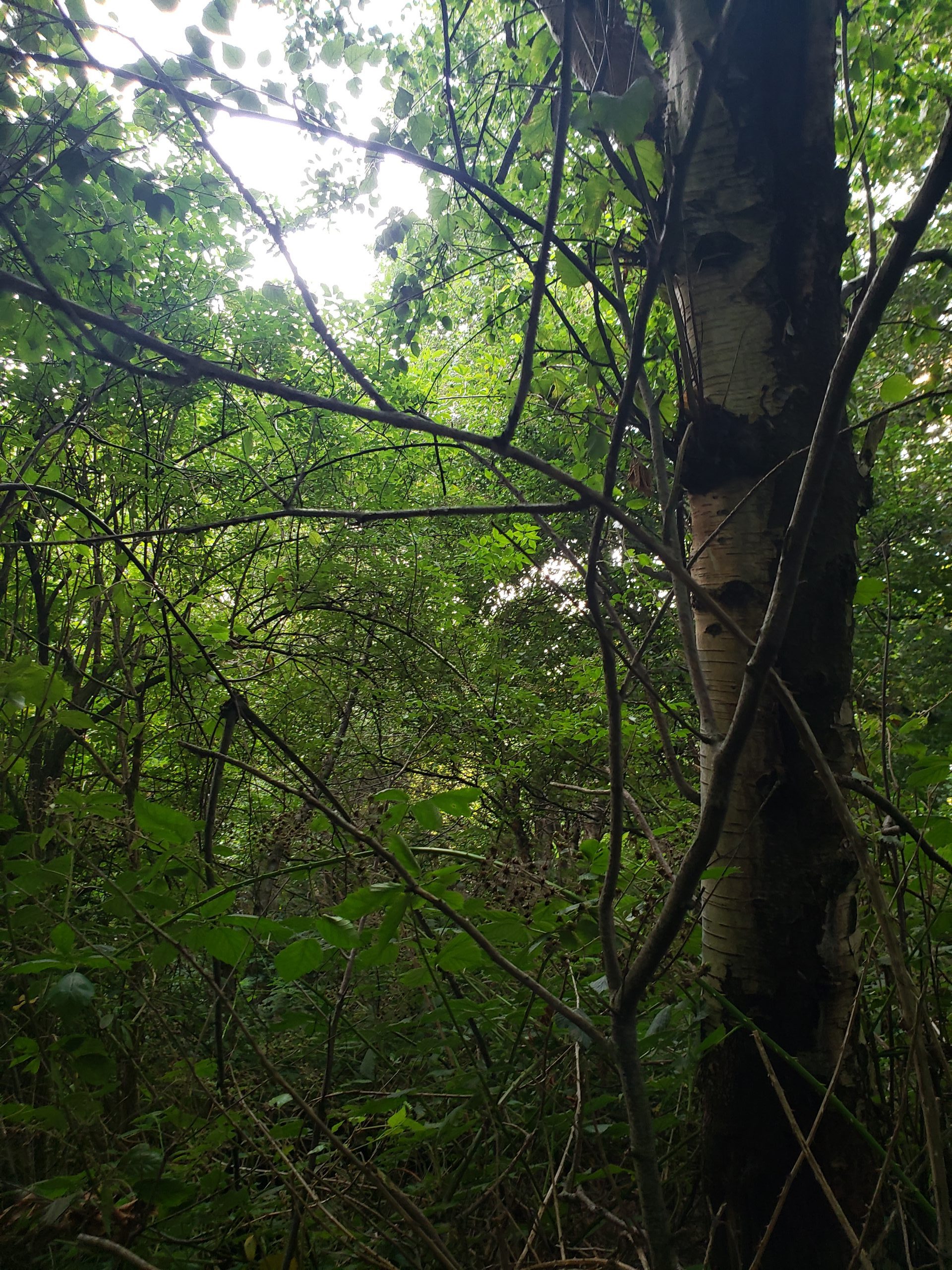 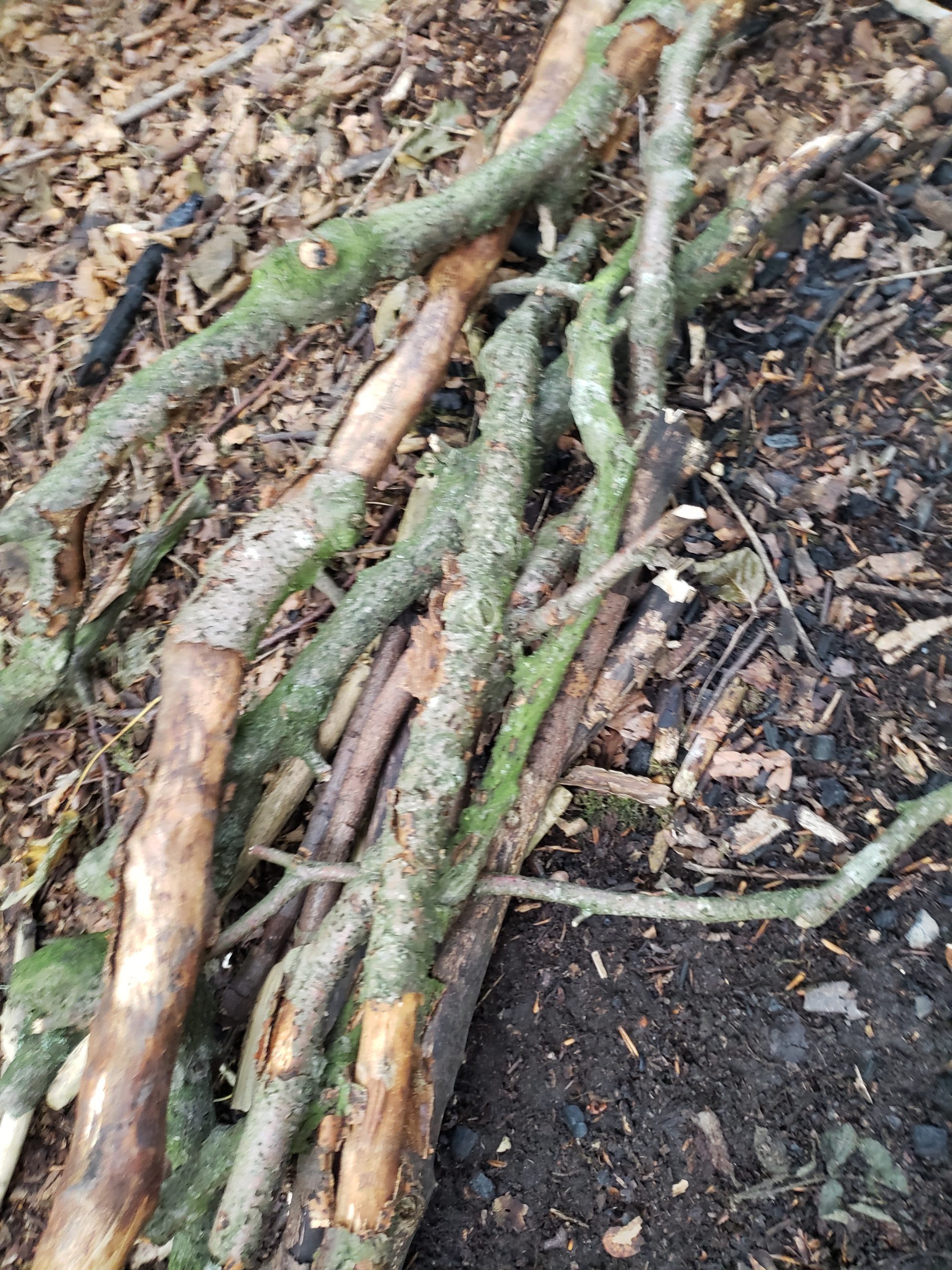 Fuel requires an already built fire to catch. Due to how large and dense it is, you’ll need to wait until the fire is good and going!

Gather any large sticks, logs and branches you can find. It doesn’t matter if they’re a bit damp or covered in moss.

Your fire will be self-sustaining by the time they’re put on top. Fuel will allow it to last a lot longer without much maintenance.

Arrange the fuel into piles of sizes as you don’t want to put really large ones on too quickly. 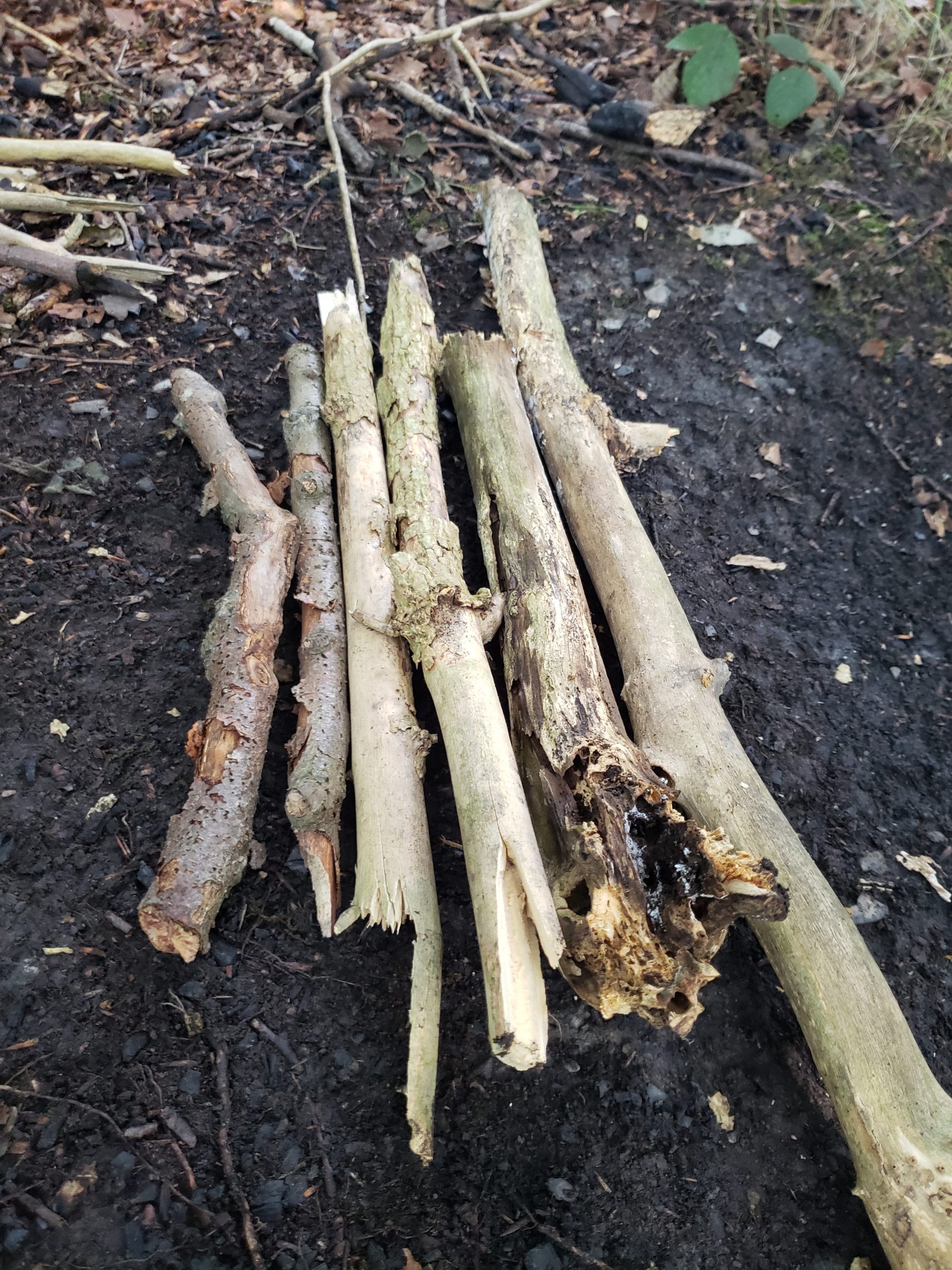 Fire lays are a term for your fire build before ignition.

It should always start with a minimum of 5 sticks, an inch thick, laid on the ground.

A carpet of sticks will keep your fire off the cold ground, particularly in wet weather.

It also serves to allow more oxygen to feed into the fire from below.

In short, making a fire is ten times easier with a bed of sticks! 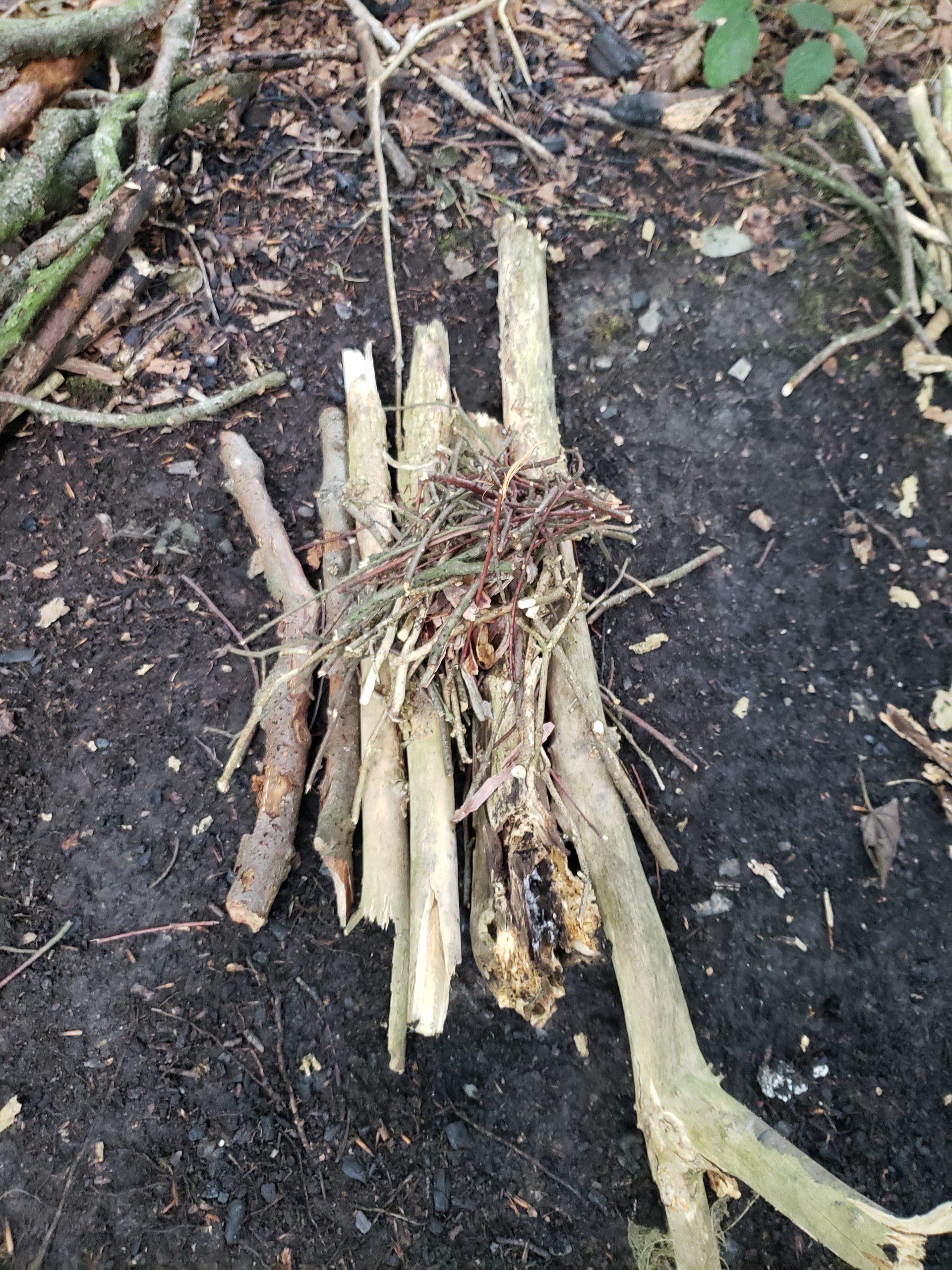 Simply pick up your build of sticks and place them on the firelay in a kind of tee-pee shape.

Leave room underneath for your tinder. 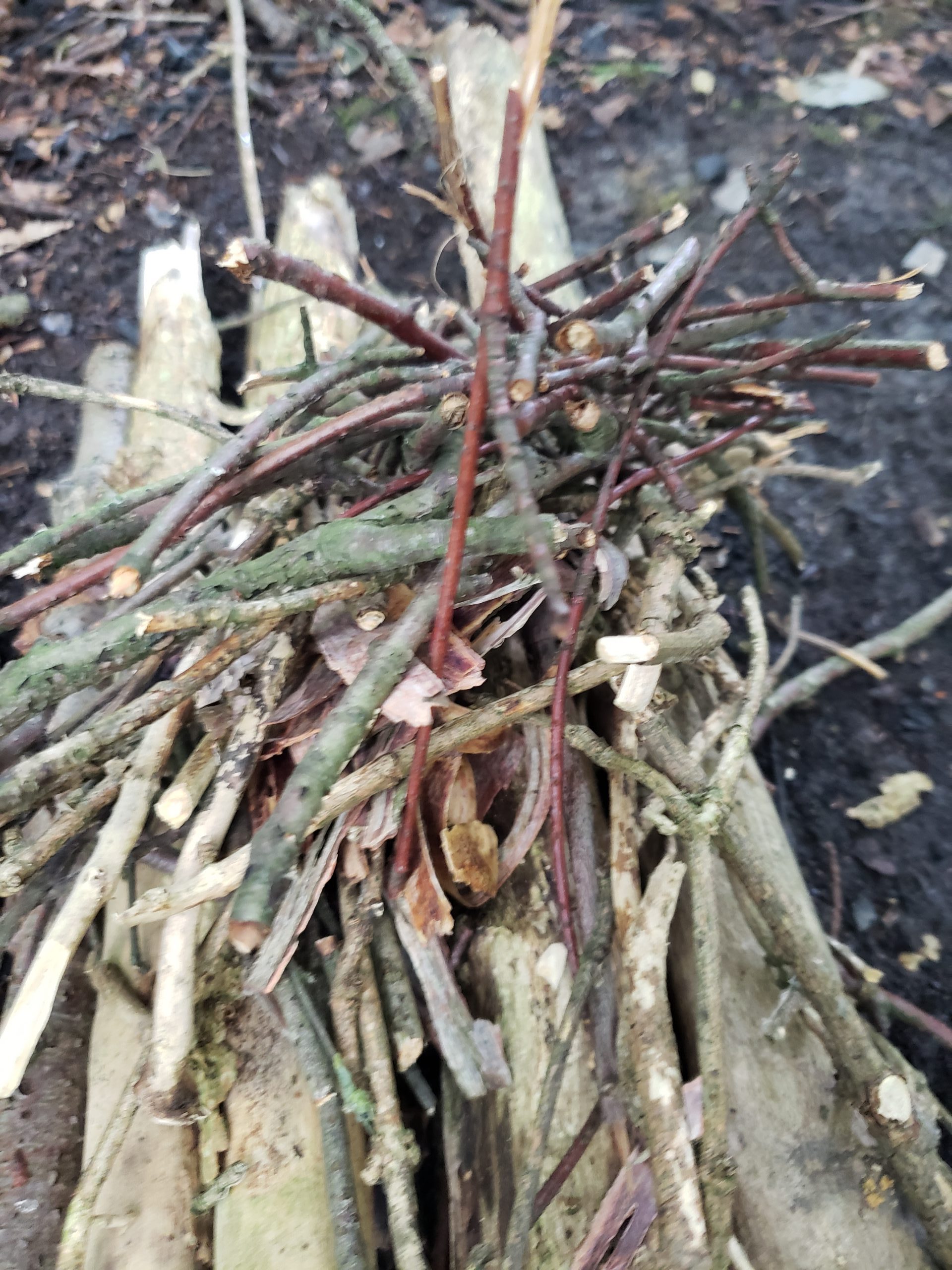 Add a small handful of your desired tinder underneath the kindling.

You can do this beforehand, adding the kindling ontop of it. I prefer to do it this way but it doesn’t matter!

This particular birch bark was harvested from a fallen birch tree. 3 large strips were taken, with half a strip used per fire. 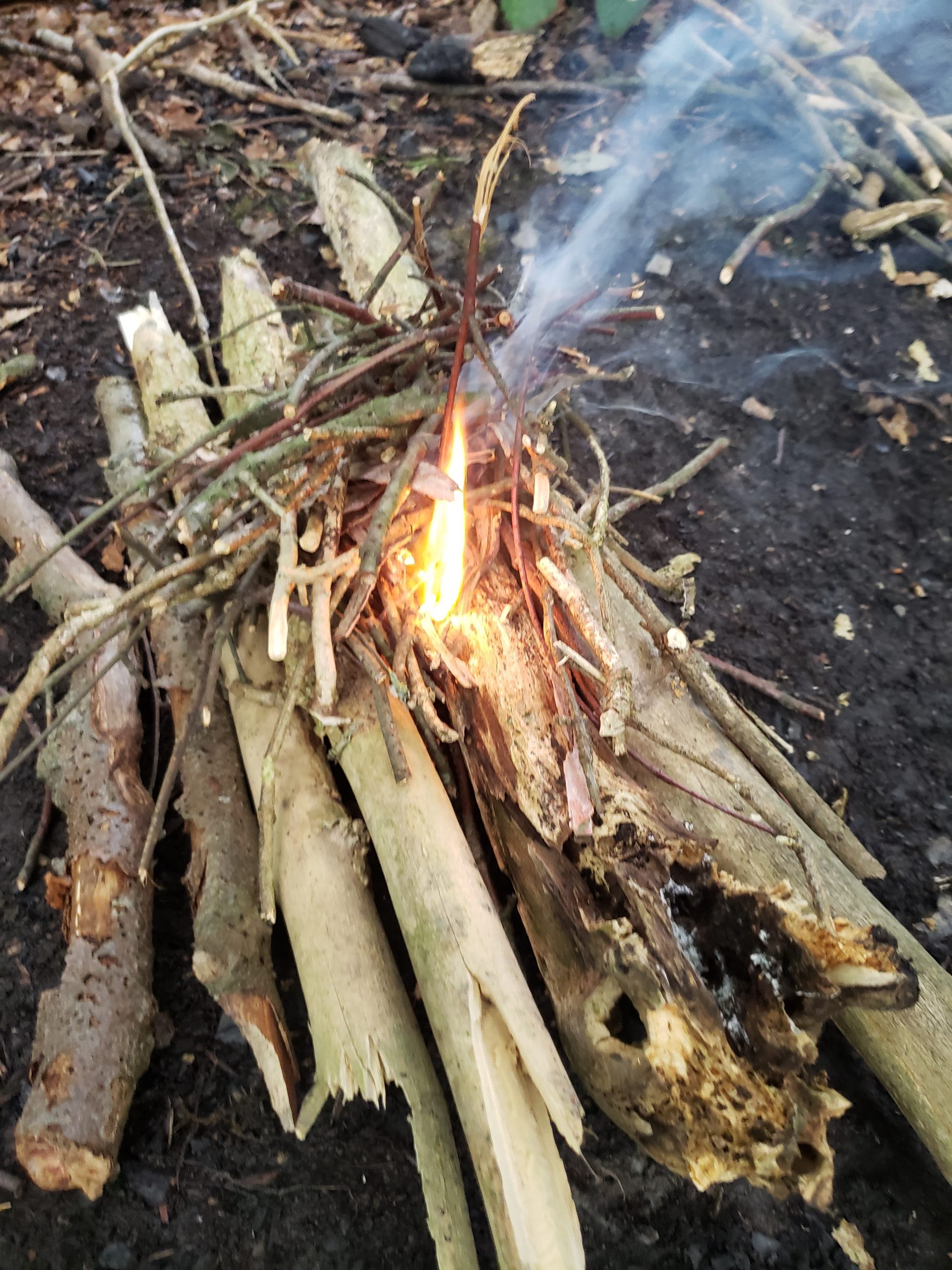 Simply light some of the tinder with a lighter, give it a good few seconds to catch.

The flame will spread; wait until most of the tinder is burning and gently push the kindling to make sure it’s over the flame. 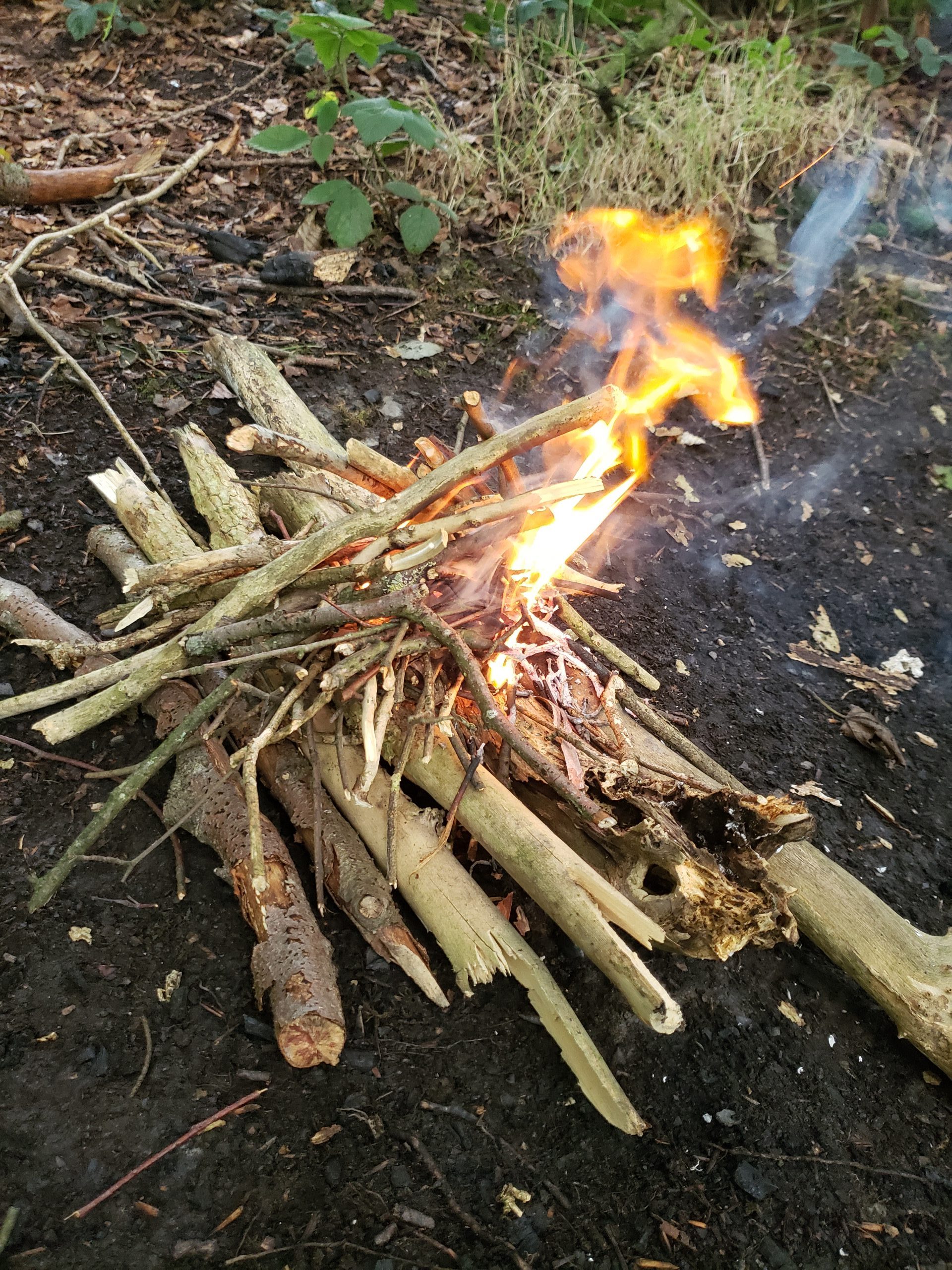 Increasingly add larger kindling sticks. Pencil sized ones will be fine, then finger width ones.

At this point, the flame won’t die out anytime soon. So you can spend 5 minutes or so collecting more wood or taking a break. 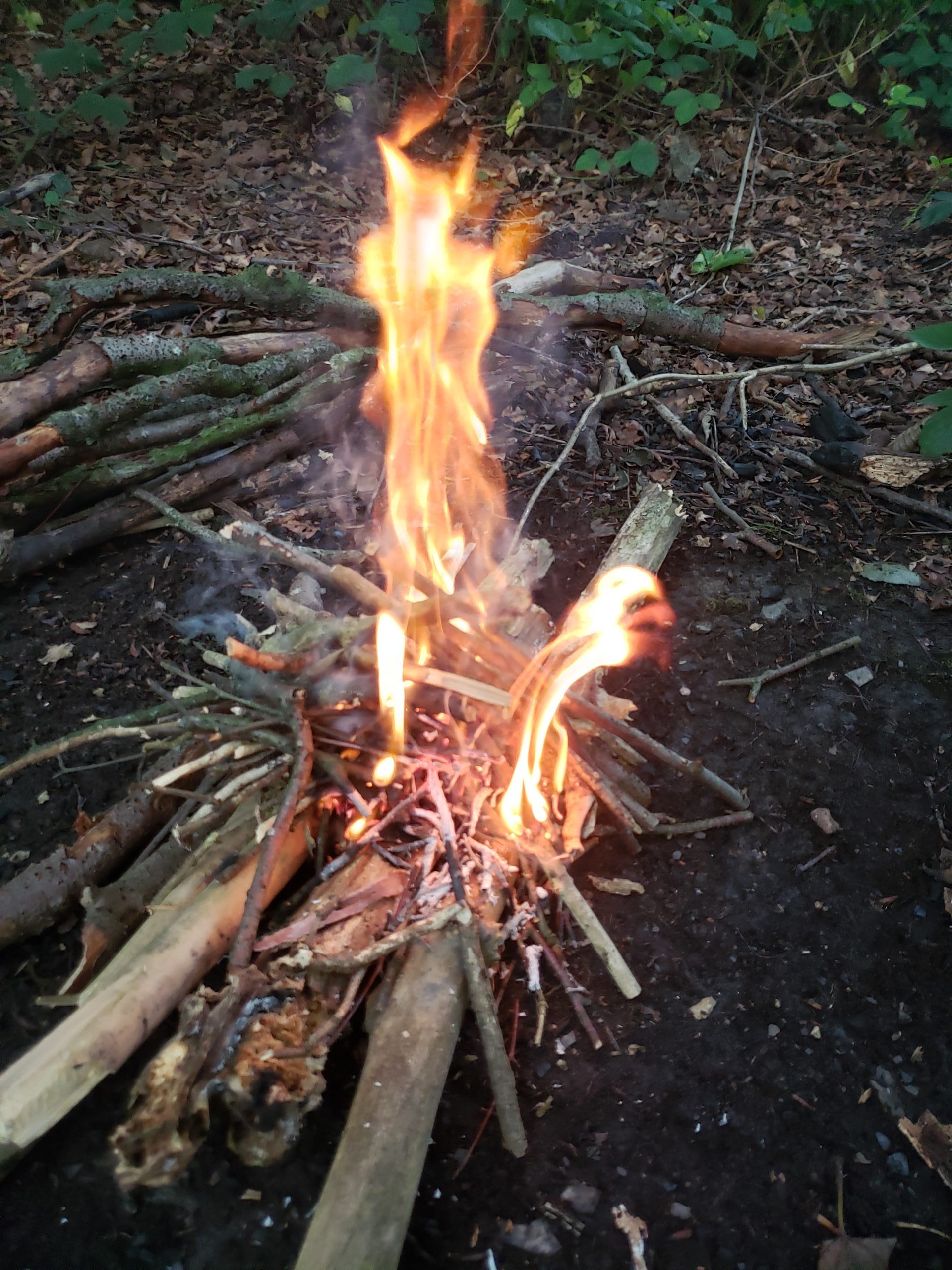 Now it’s time to start putting the big sticks and logs on.

Continue with the smallest ones, gradually working up.

Damp sticks are fine here, as the fire will dry them out.

The fire is well and truly going now. It’ll be another 30 minutes before you need to add more fuel! 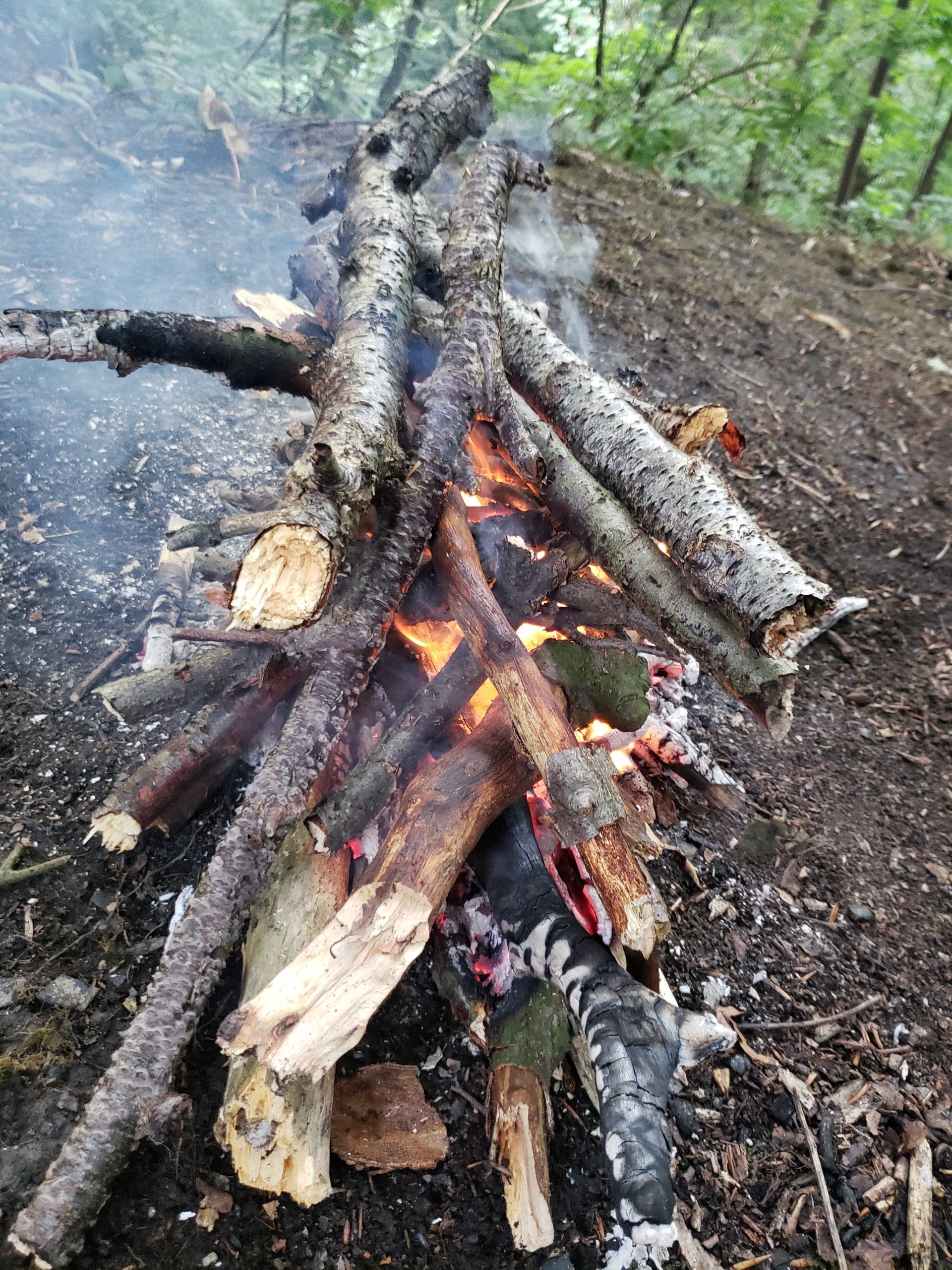 To finish it off, keep adding large fuel branches and logs.

Make sure to leave space for the smoke to release, as well as for air to enter the bottom.

Most of the larger sticks and logs will char instead of turning to ash. This is great, leaving to burn consistently for a long time.

Depending on the fuel used, the fire can now last for a minimum of an hour without adding more fuel. 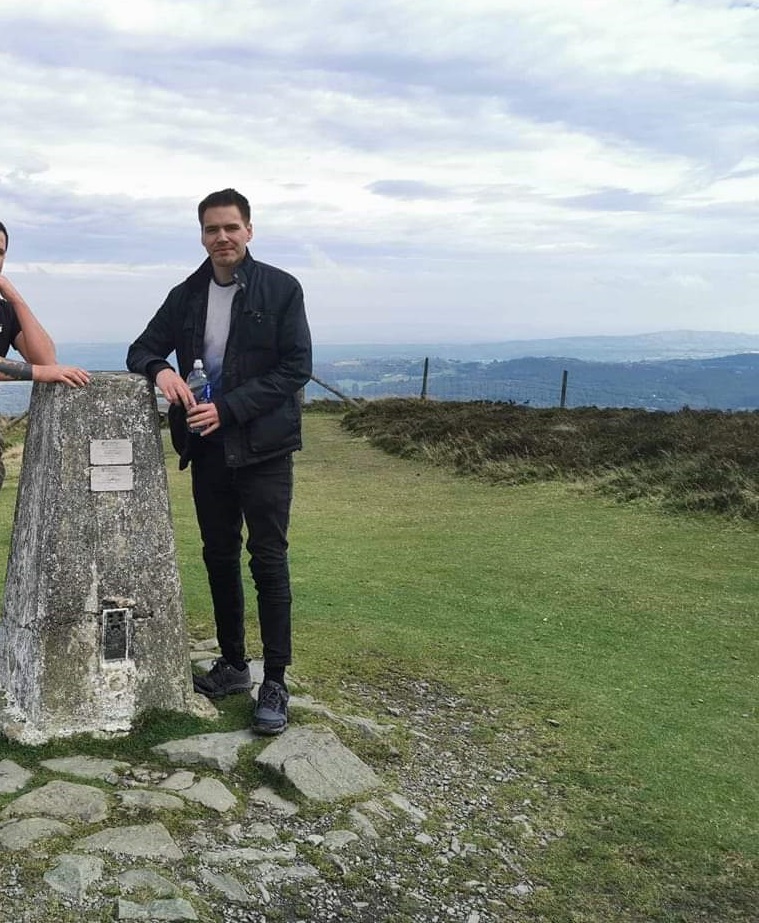